Deacons and Seminarians Assigned to Our Parish 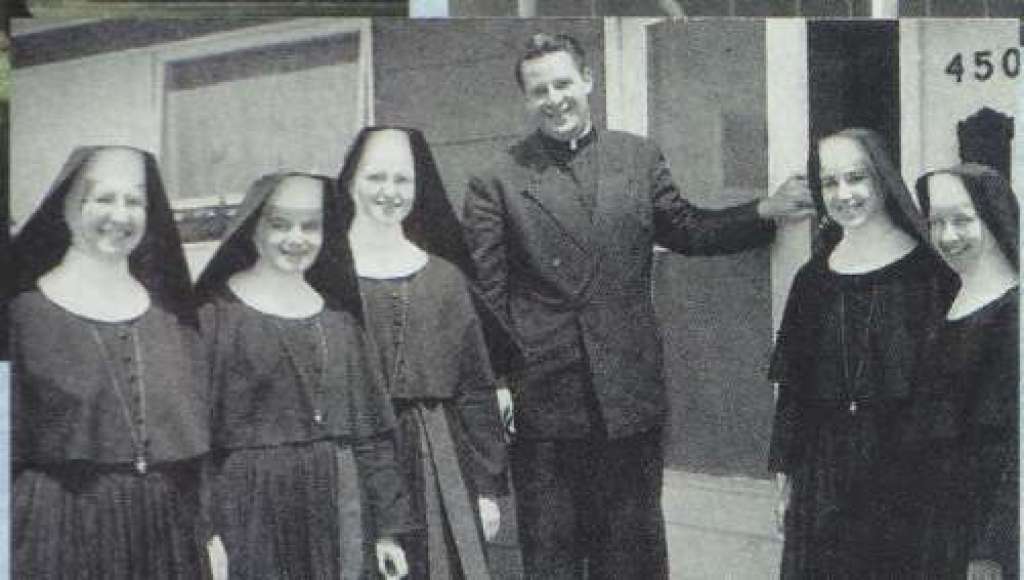 Fr. Urban Kuhl was appointed founding pastor of the new St. Augustine of Canterbury Parish and 10 acres of land were purchased from Mr. and Mrs. August Vernier on August 12, 1955. The first mass offered in the new parish was held in the St. Clair County Highway Garage on September 4, 1955 along with the first baptism (Jennifer Hoeffken) and the last mass was held there on Dec. 9, 1956. The Holy Name Society, the Queenship of Mary Sodality and the CYO were formed before the month was out and the first rectory was a rental at 620 Royal Heights Road.

The first building to be built was the parish school. Groundbreaking for the new school and auditorium was held on March 25, 1956 and the school opened temporarily at the “Barn” in Fairview Heights on Rt.159 on September 3,1956. We were able to move into our new school building in in December of 1956. Fr. Kuhl moved into a house at the corner of the church property and used it as the rectory in 1957. The parish grew so quickly that we had to add 4 new classrooms in 1959. By 1965 we had over 600 students in grades K-8. The first principle and staff were religious from the Adorers of the Precious Blood Order. The first Lay Principle was Mr. Fred Lotz in 1973 and by 1975 we saw the last of the teaching Sisters in the school.

By January of 1965 we were out of debt and planning began for the new church building as we were fast outgrowing the space in the school auditorium for mass. In July borings were done for the church and it was discovered that there was a coal mine at 160 feet which added to the original cost estimates. The cost of the new church was $700,000 and we had to cancel building the new rectory. Ground for our church was broken on March 11,1968 and the new church was dedicated by Bishop Zuroweste on May 9, 1969. After the last of the nuns who taught at the school left, the decision was made to convert the convent into a rectory and in April 1977 an open house was held. The parking lot was asphalted in 1976 and the last major construction project was a $500,000 addition to the school auditorium in 1988.

The first young man from the parish to be ordained was Theodore Bauman, who was ordained on May 13, 1967,  and celebrated his first mass at St. Augustine on May 14, 1967.  Daniel Mongan, our next parish son to become a priest was ordained on June 3, 1972 and said his first mass in St. Augustine Church the next day. Parishioner, Francis Theis, was ordained Deacon in October, 1980. Thanks to God’s grace St. Augustine’s parish provided another son to be ordained to the priesthood in Larry Lemay, ordained June 5, 1999. Upon Msgr. Kuhl’s retirement in 1995, Fr. Andy Knopik was named our 2nd Pastor.

St. Augustine of Canterbury opened the celebration of the 50th Anniversary Year in 2005 with a Mass celebrated by newly installed Bishop Edward Braxton in August 2005. The celebration continued throughout the entire year and ended with a special luncheon celebration in 2006. In 2007 Fr. John Myler was named  Pastor of St. Augustine Parish in addition to his prior duties as pastor at St. Mary. Fr. Stan Konieczny, a newly ordained but late vocation priest, was named Associate for both parishes.

In June 2008, Bishop Braxton ordered both St. Augustine of Canterbury School and St. Mary School closed and that both parishes would combine their resources into a new school to be located in the St. Augustine School building. The new school was named St. Mary-St. Augustine School and Msgr. William McGhee, who replaced Fr. Myler as Pastor of both St. Mary and St. Augustine Parishes, was named School Superintendent. Upon the arrival of Fr. Patrick  Okwumuo as Parish Administrator of St. Augustine in July 2009 the parishes were once again made independent of each other and the Bishop appointed Msgr. McGhee and Fr. Okwumuo to be Co-Superintendents of the school. In July 2012 Msgr. William McGhee was again appointed Pastor.  In 2013 Bishop Braxton announced the Diocesan Parish Renewal Plan and made St. Augustine Parish and St. Henry Parish working partners. At this time, we are moving towards a closer partnership/relationship with Fr. Ken York, Pastor of St. Henry and the St. Henry parishioners. St. Augustine Parish also currently has a parish son in the Diaconate Program.  In May of 2018, St. Augustine Parish welcomed Jim Law, a parish son, as a new Deacon.

St. Augustine of Canterbury Parish has been truly blessed to be served by fine pastors, associates and Deacons through the years. St. Augustine's parish celeb rated our 60th anniversary on August 12, 2015, with a special mass and dinner which was attended by all of our former pastors and associates and our current and past deacons.  We will celebrate our 66th Anniversary on August 15, 2021.  We have worked together in peace and love and our efforts have earned us a beautiful parish facility and a wonderful and supportive faith community. Our prayer is that we will have many more years together to serve God and each other.